He is at least 20 now.  When we picked him out at the Humane Society, they thought he was at least a year old.  Someone had found him as a stray and brought him in, so that was all we knew.  We adopted him 19 years ago last summer, so 20 he is.  Which is 96 in human years.  NINETY SIX.

He is such an integral part of our family, Charlie doesn't know life without him. 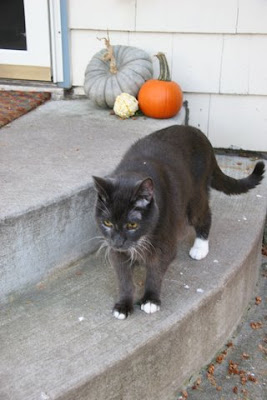 He can be a pain in the butt.  He has always been very vocal, the thought is that he is part Siamese.  He likes to visit Mike and I in the wee hours of the morning, and meows until we bring him in bed with us.  He used to just jump up and snuggle in, but the arthritis in his injured leg doesn't let him do that anymore.  So we pick him up, and love him, and go back to sleep.

He eats a lot, three to four cans of food a day.  And he has no trouble letting you know when it isn't fresh enough for him. 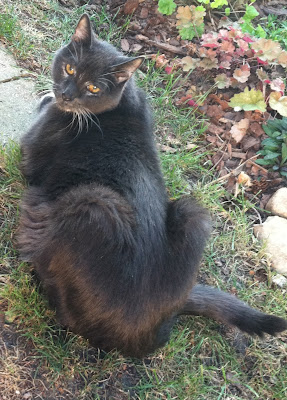 He LOVES to go outside.  Based on his last fateful unsupervised adventure, he doesn't get to go out without one of us by his side.  Sometimes he will just lie in the grass, soaking up the sun.  I planted lots of catnip for him this year, he always visits it for a snack when he is out.

Being 96, he mostly sleeps.  As the temperatures drop we will put a heating pad under his cat bed, so he can have a little extra warmth for his old bones.  (safely, of course....)

We give him 5 meds twice a day.  Clearly a senior.  He just had a check-up a couple of weeks ago, and his vet is always impressed by what great shape he is in "for his age".

Even when he wakes us up at 4 am, meowing loudly, we still love him, and can't imagine our little family without him.
Posted by Kristi Pohl at 9:03 AM