We had Charlie's second quarter conferences on Saturday.  His school keeps his grades and assignments posted on line, so we can check in whenever we want, and know what type of progress he is making.  We had already reviewed all of his class assignments and grades before we went in to talk to his access teacher, so there were no surprises. 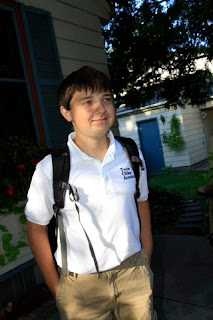 The school he attends is tough.  He has one to two hours of homework a night, and expectations are high.  There are no excuses, such as leaving your homework in your locker.  But I think that is a good thing for this age, and that is why he is at this school.  On top of that, he is incredibly smart, so the work is not over his head.
Charlie's grades dropped from first quarter.  While he got mostly A's and a few B's in the first quarter, his grades dropped to B's in the second quarter.  He is now smack dab in the middle of his class in terms of grade point.  And it isn't because he doesn't get the work, it's because his assignments were late, or turned in less than complete.  Because he has decided B's are 'good enough'.
Mike and I have never been pushy about school, or rewarded grades with money.  We don't review all of his assignments before he turns them in, or ask to see every test result.  We do monitor his planner, to see what his work load is like, and check his on-line progress reports.  We see when assignments are late, or when he obviously didn't study very hard for a test.  And we talk to him about it, and find out what is up.  And encourage extra credit, or prod him to study a bit more in the classes where he is falling short.

Last week he had an eye exam, as the school had done a screening and his vision was not great.  So now he is getting glasses, and I am thinking that may have played a part in his deteriorating grades, as his eye exam this summer showed his vision was fine. This quarter will tell.

I remember being very stressed out about school, always striving for an A and feeling bad if I got an A-.  I remember having falling grades in junior high and FREAKING OUT and it turned out I needed glasses too.
Part of me is glad Charlie doesn't freak out about getting an A-, as I don't think that's healthy.  But part of me wishes he would want to try harder, and not just be happy with 'good enough'.  He is smart enough to do the work, and if he really wanted to he would be getting straight A's.

So as a mom, do I push?  Do I enforce stricter study times?  Or do I let him figure this out on his own, and perhaps he will come to the realization that he wants more than 'good enough'? 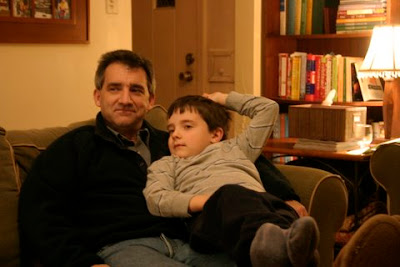